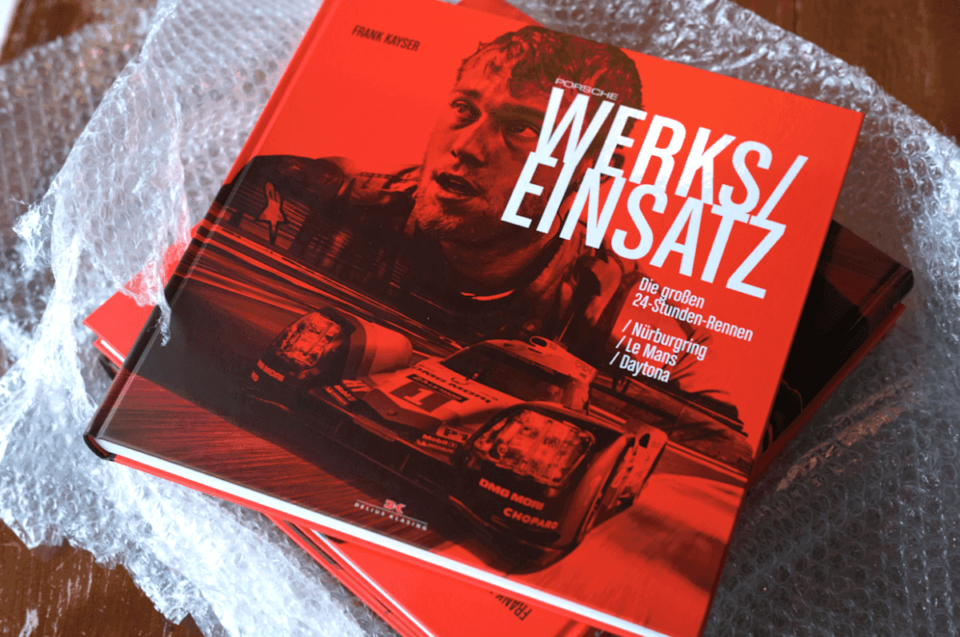 Porsche is highlighted in a new endurance racing book.

Kayser not only writes of his exhausting work but the painstaking decision of what 223 images among thousands available to feature in the book. With his publisher and designer, the selections are exquisite. The immensity of the tracks, the beauty of the cars, the passion of the athletes, mechanics and fans — it’s all captured.

The image on pages 84 and 85 of the 272-page, 5.2-pound book spotlight a pit crew in full work mode, enveloping a car for examination. The image pulls a reader into the action. Three pages later, a full double-page image provides further emotion. A pit crew wearing matching yellow-tinted goggles staring at Porsche in the pits couldn’t be more telling. It’s a collective look of automotive obsession.

Hientzsch’s accompanying text is used sporadically. “Over 5,000 kilometers (3,100 miles) await the teams — roughly equivalent to an entire Formula One season carried out in one day,” the author succinctly states about a Le Mans race. It leaves no doubt about his motorsports preference.

(These books are available on Amazon.com via the hyperlinked titles. Please considering supporting our site. TheWeeklyDriver.com receives a small commission for products purchased via the online retailer.)

Muscle Car Barn Finds is a new book about finding automotive relics. Writer/photographer Ryan Brutt has no less enthusiasm than endurance racing enthusiasts. But his passion is better defined as an automotive scavenger hunt.

The premise: You’re driving along a country road in Alabama and something bright orange in nearby field attracts your attention. It’s parked near an old barn and partly covered in mildew. You pull into what remains of the driveway in the abandoned lot and your hunch is correct.

It’s a 1966 Mustang Fastback. It looks neglected. But a good washing later, it’s presentable, and another vintage muscle car has a new life.

The same scenario could involve a station wagon in Michigan, a Mercedes-Benz in Florida or a long-forgotten pick-up truck in Texas.

They’re all known by the automotive colloquialism, Barn Finds. It’s the sub-set of muscle car barn finds Brutt honors in his new book of the same name.

“These old warriors aren’t dead, just resting,” reads a segment of the book’s promotional material. “A drive in the country or through a small-town back street will reveal them lurking under tarps, hidden behind garage doors and stashed behind fences from prying eyes.”

While traveling in eastern Tennessee, Brutt finds what he had long heard about but couldn’t believe until it appeared through some roadside hedges. Past a few roads of project cars in various shapes, sizes and degrees of disarray, a storage shed was home to an array of first-generation Corvettes.

“In all my travels, I had never seen such a collection of really early Corvettes,” he writes. “There were three rows of them with three or four cars per row.”

Brutt’s enthusiasm for automobiles matches Kayser’s level of passion. Only their preference of vehicles is different.

These two new books many other automotive-releated books are available on Amazon.com Please support TheWeeklyDriver.com by visiting the online shopping site from the banner below. It’s ideal for all of your needs — books to automotive parts, electronics to last-minute gifts. We’ll earn a small commission on your purchase(s). You’ll pay the same price as clicking directly to Amazon.