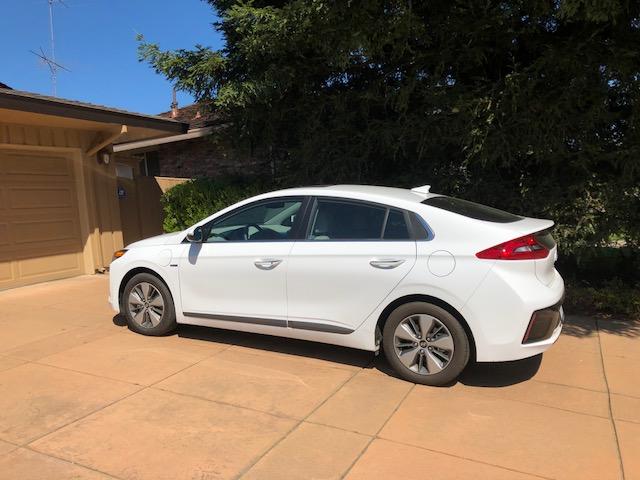 Since the debut of the Toyota Prius in 2000 as the first mass-marketed hybrid in the United States, several manufacturers have tried to infiltrate the odd-looking green car leader’s dominance. All have failed.

Now, there’s a legitimate contender, the Hyundai Ioniq. The unusual name is the combination of the words ion and unique, and the vehicle’s title works. The Ioniq’s specs outdo the Prius numbers in multiple categories.

The 2018 Hyundai Ioniq is the first hybrid that could provide a serious challenge to the Toyota Prius.Unveiled in 2016 as a 2017 model, the Ioniq is the only green car available in three modes — a traditional hybrid, full-electric and plug-in hybrid. The entry-level Ioniq plug-in hybrid Blue Line model is rated at 57 miles per gallon in city driving, 59 miles per gallon for highway treks.

Its rating is several miles per gallon higher than the best mileage in the Prius lineup. In electric mode, the Ioniq has a 27-mile range. The efficient little machine can travel nearly 700 miles using gas only.

The Ioniq is unlike the Prius because it’s equipped with a six-speed dual-clutch automatic transmission. The 1.6-liter, four-cylinder engine generates 139 horsepower. The electric motor is backed by a 1.56-kWh lithium-ion battery. Prius models have continuously variable transmissions (CVT).

Also unlike the Prius, the Ioniq looks and drives like a traditional hatchback. It has well-contoured, svelte exterior styling with a signature Hyundai trapezoidal front grille. The interior is equally well-crafted with sections of the side panels smoothly meshing well into the door handles and side audio system speakers.

Environmental considerations are further considered in the Ioniq’s interior construction. Sugar cane extract is a major ingredient in the headliner, carpet and soft-touch panels. Door panels are made from a composite of recycled plastic, powdered wood and volcanic stone.

Engineers were also crafty. The hybrid battery and fuel tank are located under the rear seat. The 12-volt battery for starting the Ioniq and using its accessories is incorporated into the main hybrid battery.

The efficient use of space leaves a cavernous cargo area, considering the segment. One example: Two home windows screen needing repair didn’t fit in a recent review sedan, so I had to borrow my wife’s Honda CR-V for a short trip to a local hardware store. With the split back seat down, the Ioniq has 26.5 cubic feet of cargo space. The screens fit in the Ioniq flat for the return trip and with a few inches of width and length to spare.

Except for Tesla, alternative fuel vehicles aren’t known for their acceleration. The Ioniq maintains the segment’s reputation. It completes the 0-60 miles per hour standard in 8.1 seconds in economy mode. But with a flick to the left on the shift lever, sport mode is engaged and the Ioniq’s persona morphs into a spirited, near sports-car-like machine. It’s far removed the sluggish hybrid reputation. The odometer speed indicator becomes a tachometer.

Not everything is ideal with the Ioniq. It shares with the Prius an annoying split rear window view via the clumsy hatchback design. It severely blocks the view. A rear windshield wiper would be a welcomed addition.

Since its debut with Kia, its close relative, one of Hyundai’s strengths is its 10-year 100,000-mile powertrain and 5-year, 60,000 bumper-to-bumper warranty. Hyundai also offers a lifetime battery warranty if there’s a complete battery failure.

The Ioniq’s base price is about $23,000. With various trim levels and optional packages, the cost can reach $31,000. The top-of-the-line price places the Ioniq near the country’s current average price of a new car. That seems reasonable in Hyundai’s quest to challenge the Prius.