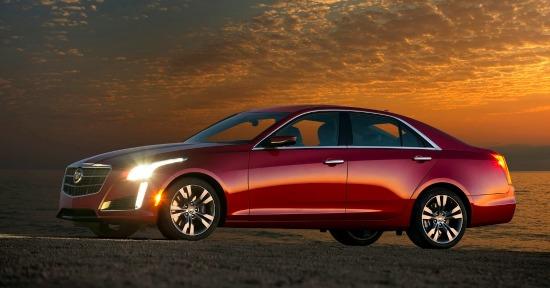 Owners of the new 2014 Cadillac CTS Vsport sedan could compete with the fairly common Audi, BMW and Mercedes mid-size sedans owned by neighbors—although most would know little or nothing about the Vsport.

Oops, there goes the “foreign prestige” factor for Vsport owners. Well, bunk. The $59,995 Vsport four-door (not to be confused with the Cadillac CTS-V) can match prestigious foreign rivals.

Cadillac ignored the Le Mans achievement. It was selling luxury, not race-track ability, despite its highly touted new high-compression-8, introduced for 1949.

But competition from Mercedes began to seriously affect Cadillac sales and prestige in the 1970s. Still, Cadillac continued to emphasize luxury, despite a few sporty models such as its mostly mediocre 1987-93 Allante sports car.

The revised Cadillac CTS comes in various forms, but the Vsport version takes the trophy with its combination of speed, handling, luxury and technical sophistication. For instance, this is the first General Motors vehicle with aluminum doors, hood and other aluminum components.

Weight is an enemy of performance and economy. Cadillac engineers thus worked manically to make the Vsport lighter. They even used super-light magnesium engine mounts to save about two pounds.

As with all 2014 third-generation CTS models, the Vsport has been restyled, growing five inches in length, with a 1.2-inch longer wheelbase (at 114.6 inches). The roofline and cowl (base of windshield) are nearly an inch lower, and the curb weight is about 200 pounds less than the popular mid-size BMW 528i. The grille is wider, and headlights flow up with the hood line.

There’s plenty of room for tall backseat passengers, although this is a rear-wheel-drive car. The center driveshaft tunnel thus makes the middle of the backseat uncomfortable for anything but short trips.

The opening for the large trunk is rather high. There are split rear seatbacks that fold flat to enlarge the cargo area, but the pass-through opening from the trunk to the rear seat is only moderately large. Front doors open wide, but rear door openings are somewhat narrow.

The CTS Vsport has Cadillac’s first twin-turbocharged engine. The 3.6-liter engine has 420 horsepower and a neck-snapping 430 pound-feet of torque. A pair of Mitsubishi turbochargers help let the engine do 0-60 m.p.h. in 4.4 seconds in a linear V-8-style fashion with virtually no turbo lag and to 100 m.p.h. in 10.3 seconds.

City fuel economy of the CTS Vsport is only an estimated 16 miles per gallon, although the highway number is 24. You may do better on open roads, as the engine of my test CTS Vsport only showed 1,800 r.p.m. at 65 m.p.h.

The engine works with no less than an eight-speed automatic transmission—another “first” for Cadillac—with easily used magnesium paddle shifters for manual shifting. There are “Tour,” “Sport” and “Track” modes. The Track mode is best suited for tracks or (dare I say?) street racing, with a specific steering rate and Magnetic Ride Control calibrations for greater track performance. I didn’t go near a track (or street race) so I found “Tour” mode to be just right, with its firm-but supple ride.

It doesn’t take long to appreciate the Vsport’s quicker steering ratio with sport-tuned steering effort and response and an easily gripped heated and leather-covered power tilt/telescopic wheel. The car has nearly a 50/50 weight balance. And its sport-tuned suspension with enhanced spring rates and stabilizer bars help deliver excellent handling, backed by a Stabilitrak-Stability Control system with traction control.

The Brembo disc brakes are impressive, with good pedal feel. You can get them with optional high-performance brake pads. An electronic limited-slip differential taken from the 2014 Chevrolet Corvette enhances track capability, including optimal acceleration out of turns.

Numerous luxury features include even small ones such as (would you believe?) a motorized cup-holder lid in the front console. There’s also an electronic glove compartment release, which I couldn’t immediately find. A regular mechanical one would do fine. Interior materials are good, although Audi may have an edge here.

Besides the usual air bags, safety items include front and rear park assist systems and an automatic parking assist.

Is the CTS Vsport for you? If you’re a member of the herd that buys foreign luxury sports sedans, maybe not. But, after all, it is a Cadillac, and a good one, at that.

Dan Jedlicka has been an automotive journalist for more than 40 years. To more of his new and vintage reviews, visit: www.danjedlicka.com.