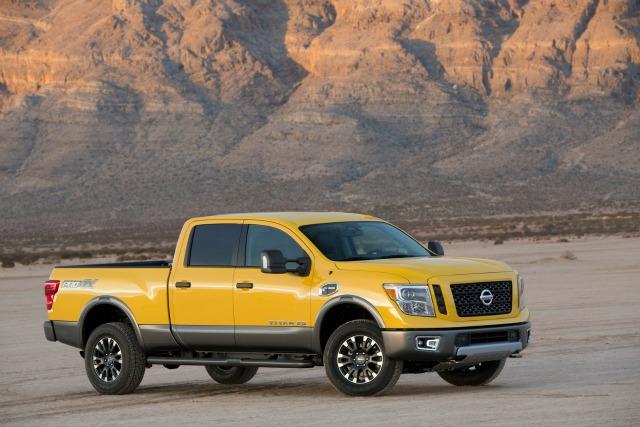 Every car publication annual selects its cars and trucks of the year. It remains a mystery why it’s done early in the calendar year, but Cars.com has selected the Volvo XC90 as its 2016 Car of the Year.  And the debuting Nissan Titan XD as its 2016 Pickup Truck of the Year.

In part, here’s what editors at Cars.com wrote about the 2016 Nissan Titan XD:

“Not only does this new truck attempt to carve a unique place for itself in between two well-established segments (the half-ton and three-quarter-ton segments), but it also tries to re-establish Nissan as a competitive player in the world of full-size pickup trucks — and that’s a tall order.

“Where the previous light-duty Titan was a clear attempt to court younger, affluent, family-oriented buyers (which is and always has been the heart of the half-ton market), this new Titan XD attempts to be a more credible “true-truck” competitor by coming to market with a heavier-duty ladder frame and chassis, giving it solid and much-needed payload and towing credentials. ”

“Add to this a stronger powertrain with a stout 32-valve twin-turbo 5.0-liter V-8 Cummins engine, rated at 555 pounds-feet of torque, and you can see why Nissan is excited about the XD’s potential, not only with more affluent lifestyle consumers, but fleet buyers looking for a solid workhorse.”  ”The new Titan XD is the first in a two-prong approach; the next is when the lighter-duty Titan arrives later in 2016.

“In the meantime, this new pickup sits in a space where Nissan hopes to lure a decent percentage of pickup buyers to a new type of “right-sized” choice: one with more towing capacity than many half-tons, and with better ride and handling characteristics than the more rigid and punishing (particularly when driven empty) three-quarter-ton competitors.  ”We especially like the new interior and well-defined trim packages, which include a new, versatile off-road package that has the ground clearance and gear ratios to make it a strong player in the world of dirt and rock while at the same time remaining a comfy daily driver.”

Here’s the listing of the Cars.com best vehicles of 2016:

To read Car.com’s complete reviews of all of its choices for 2016, visit: CARS/TRUCKS OF THE YEAR