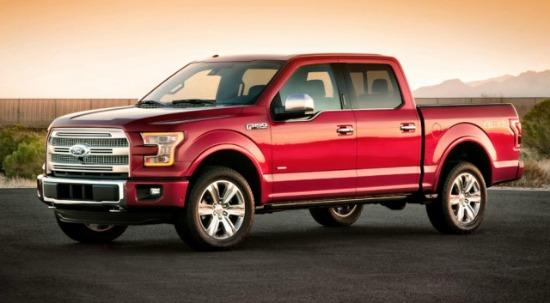 The 2015 Ford F-150 pickup truck, the country’s top-selling vehicle for 32 consecutive years, was unveiled at the North American International Auto Show as lighter, strong and with a greater towing capacity than its predecessor.

With a stronger, high-strength steel backbone and high-strength, military-grade aluminum alloys, the new F-150 is approximately 700 pounds lighter than the 2014 edition.

The weight reduction will allow the Ford F-150 to haul and tow more, accelerate quicker and stop in a shorter distance.

As the best-selling truck in the United States for 37 straight years, the 2015 Ford F-150 will also have a host of new features. A 360-degree camera, eight-inch productivity screen with new truck apps and trailer hitch assist are among the key additions.

The 2015 Ford F-150 will be available with four engine options: New is a 2.7-liter EcoBoost V-6 engine with a stop-start system for increased fuel economy. Also new is a 3.5-liter naturally aspirated V-6 as base engine. A 3.5-liter EcoBoost unit as well as a 5.0-liter V-8 are available. A six-speed automatic transmission is standard on all models.

Ford has not released prices for the 2015 models, but it’s scheduled for delivery to dealers this fall.

Ford sold 763,402 F-Series pickups in 2013, again designating it as the best-selling car, SUV or light truck in the United States.